Touch Sensing For A Projected Screen 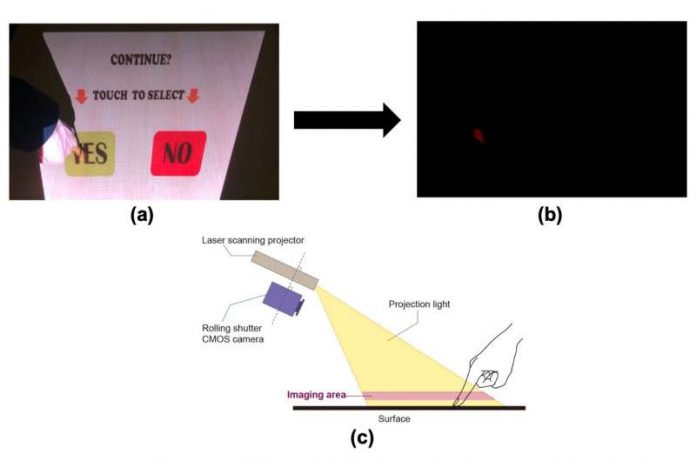 Researchers used a synchronized projector and a camera to produce a touchscreen-like interface on flat surfaces.

Researchers from Nara Institute of Science and Technology (NAIST) utilized a synchronized projector and camera to produce a touchscreen-like interface on a flat surface. The camera registers the user’s fingers when actually in contact with the surface. This eliminates the need for additional cameras, depth sensors, or light sources.

“Typical cameras observe a three-dimensional situation as a two-dimensional plane. Thus, even if the position of a fingertip can be detected, it is difficult to know whether it is touching the surface or hovering above it,” senior author Yasuhiro Mukaigawa says.

Researchers used “slope disparity gating” technique, in which the projector is synchronized with the camera, so that it captures only the region slightly above the surface. Using image processing algorithms, the touch of a finger could be localized with high efficiency.

“The method developed in the study can be used to produce a touch display on any flat surface. In the future, we will hope to expand to include touchless operations or even add gesture recognition,” Mukaigawa says. Also, because the method captures only the region slightly above the surface, privacy concerns are reduced, as human faces and other identifying details are not recorded at all.