In the world of PC enthusiasts, Lian Li is a name synonymous with top-quality aluminum cases. The company introduced their first PC cases back in the 90’s, when PCs still were a rare find in living rooms. Their minimalistic designs and all-aluminum constructs were a jewel at the time of crude steel cases with beige plastic faceplates. Lian Li today is one of the most reputable case designers and manufacturers on the planet.

For decades, Lian Li stood almost completely focuses on the design and manufacturing of top-tier PC cases. It was not until last year that the company took a significant step towards diversification with the introduction of all-in-one liquid cooling solutions. Apparently, the company found their first attempt successful and they are taking yet another step this year, with the introduction of a power supply.

In today’s review, we are having a look at the SP750, Lian Li’s first-ever PSU, rated at 750 W with an 80 Plus Gold certification. Lian Li certainly takes a peculiar diversification approach here, as their first PSU is not a regular-sized power supply, but an SFX unit, and one with a very high-power output to boot. This is a PSU for compact high-power gaming systems, quite possibly designed to match Lian Li’s own small case designs.

We received the Lian Li SP750 in a cardboard box that is typical for consumer power supplies. There is nothing special about the box but it does provide enough protection to the unit for shipping. The aesthetic design also is relatively simple, with colored edges and based on a picture of the unit itself. It is apparent that Lian Li placed just as much effort as it was needed to create a proper modern packaging and no more than that. 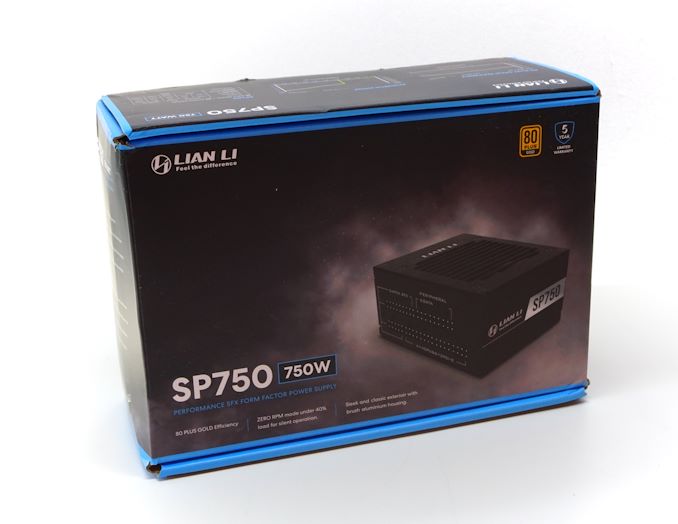 Inside the box, we found a minimalistic bundle, even as far as a PSU is concerned. Aside from a gratitude card, and a very simple user’s manual, Lian Li only included the four black mounting screws. There are no cable ties or any other accessories accompanying this unit. 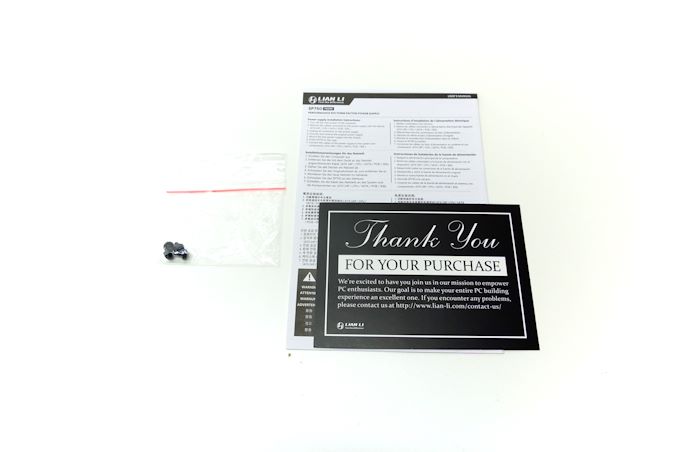 The Lian Li SP750 is a fully modular PSU and every cable can be detached, including the 24-pin ATX cable. All of the connectors and wires are black. The 24-pin ATX, the EPS, and the PCI Express cables are all individually sleeved as well, but the SATA and Molex connector cables are not. It is obvious that the cables are quite a bit shorter than regular ATX PSU cables, which is reasonable for an SFX power supply. This is a realistic choice considering that the PSU may be installed in very confined spaces where every millimeter counts but could become an issue for users wanting to use the PSU with a regular ATX case. What is strange here is the presence of three PCI Express connectors, because the SP750 clearly has the power output for two middle-range graphics cards but the lack of a fourth connector deprives users from that choice. The cables are supplied in a simple but effective storage pouch. 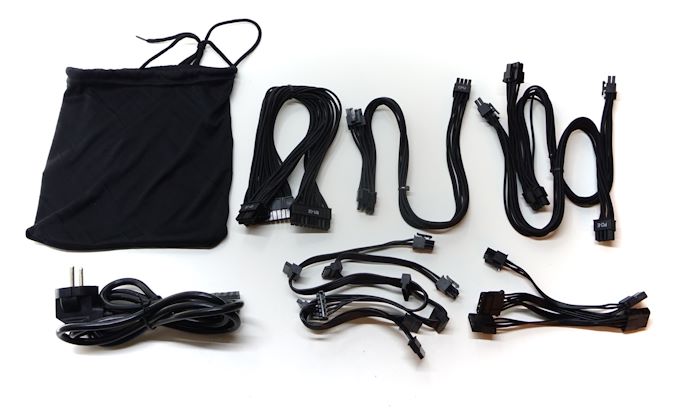 Perhaps the greatest feature of the Lian Li SP750 is its size – the company managed to get that high a power output out of a standard 125 × 63.5 × 100 mm / 4.92 × 2.5 × 3.94 in (W×H×D) SFX form factor design, making the PSU compatible with virtually every SFX case in the market. SFX cases designed to fit top-tier graphics cards usually can accommodate an SFX-L PSU as well, yet ensuring compatibility with any SFX-compliant case regardless of its target market definitely is a good thing. 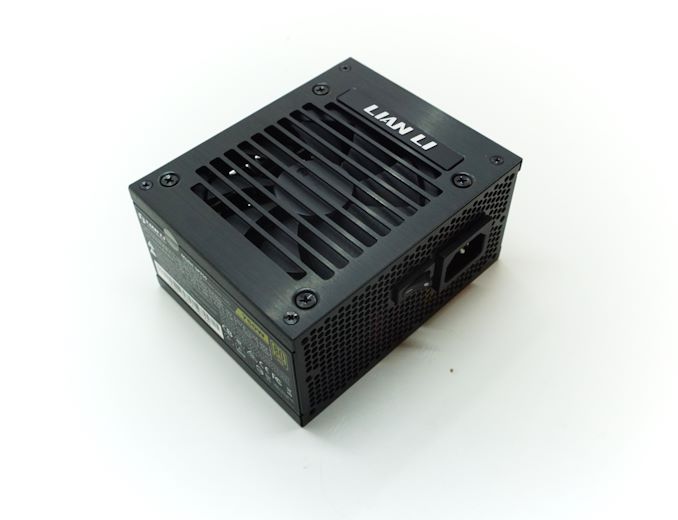 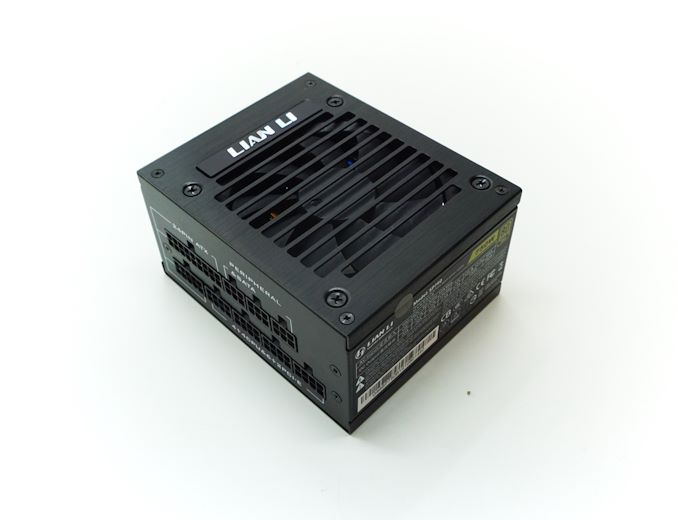 Lian Li spent plenty of time worrying about the aesthetics of their first PSU. Parts of the chassis are brushed aluminum, with stickers covering most of the unit’s sides. A beautifully made label with the company logo can be seen right next to the cooling fan. The designer went as far as choosing screws with polished heads. 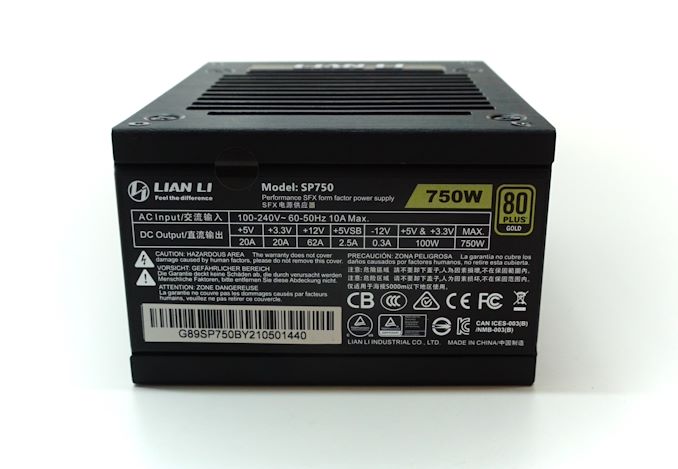 Despite the compact dimensions of the unit, the designer managed to place a small on/off switch next to the AC cable on the rear side of the PSU. The front side is densely populated with the connectors for the modular cables. The connectors are not color-coded but there is a basic legend printed on the chassis indicating what each connector is for. Besides, it is practically impossible for a user to insert a cable into the wrong connector, as each cable type has a different connector and the connectors are keyed. 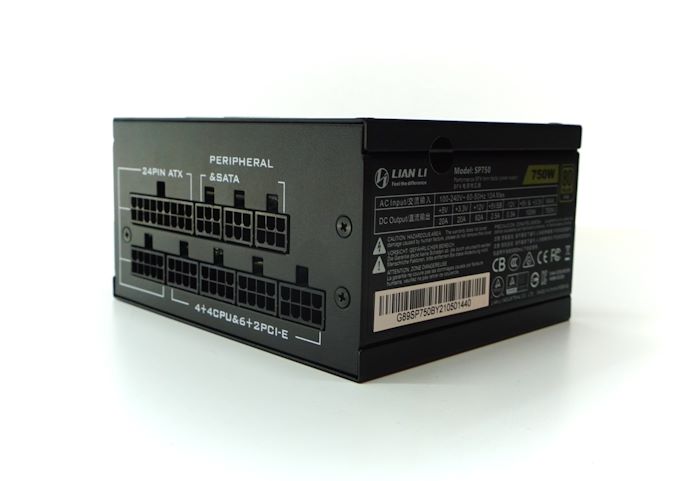 The fan responsible for the cooling needs of the SP750 is a low-profile 92 mm product made by Yate Loon, a company whose products we frequently see in PC power supplies. There is nothing too special about this fan, as it has a simple double-bearing engine and a very high theoretical maximum speed of 3000 RPM. Double bearing fans are rare in high-quality PSUs because of their high noise output but they are extremely reliable. 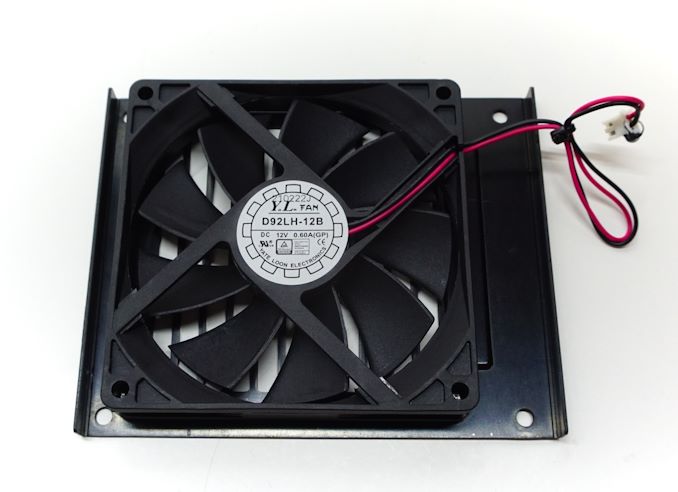 The OEM behind the creation of the Lian Li SP750 is Helly Technology, a company we rarely encounter. The interior of the SP750 is densely packed, which was to be expected for an SFX design with that much power output. The filtering stage starts on the back of the AC receptacle, consisting of two Y capacitors, two X capacitors, and two filtering inductors in total. It is a simple filtering stage, which ought to be just as efficient as necessary. 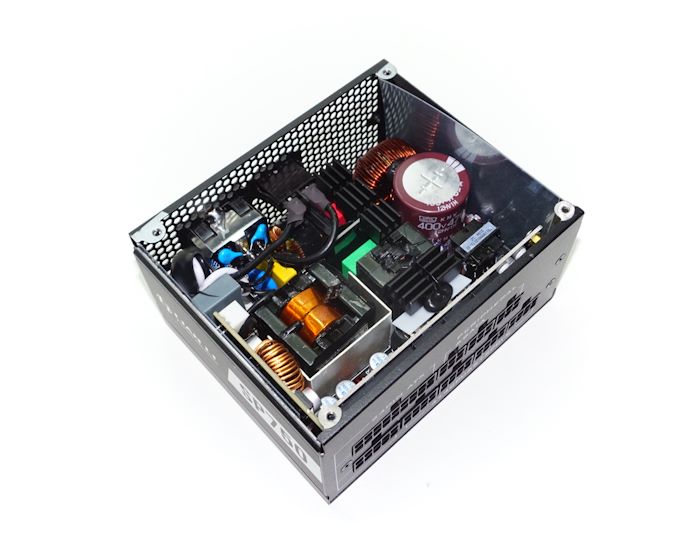 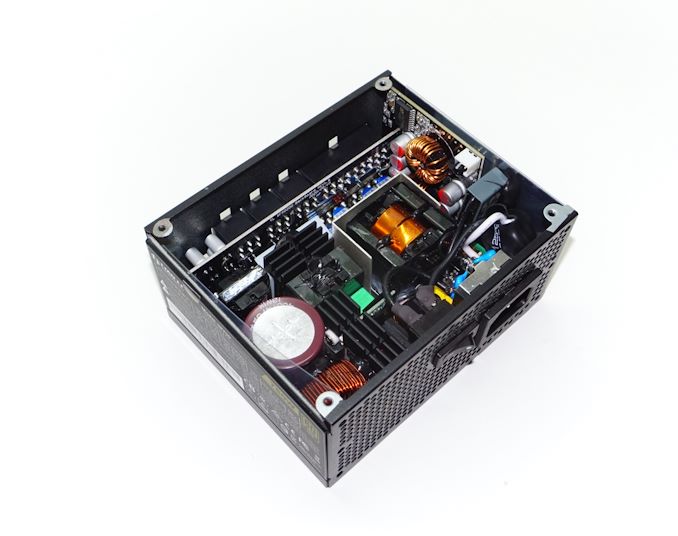 There is only one bridge rectifier, on its own heatsink – if anyone can call that tiny piece of metal a heatsink. The heatsink is but a small flat piece of metal, smaller than the chip itself. Space is an issue in such a design and a larger heatsink would obstruct the installation of the switch but we have the feeling that the designer could do a little better here. 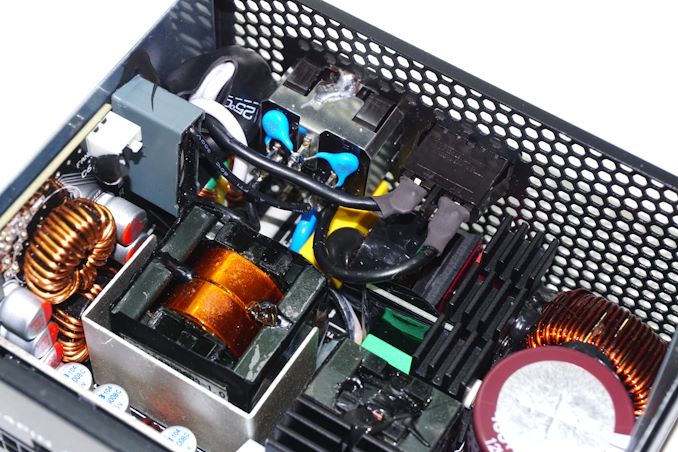 The APFC circuit is textbook, with the active components on the large heatsink across the edge of the PCB, one filtering coil, and a single capacitor. The large 400V/470μF capacitor is made by Nippon Chemi-Con, as all electrolytics in the unit are. There are two primary side inversion MOSFETs that form the heart of an LLC resonant half-bridge design. 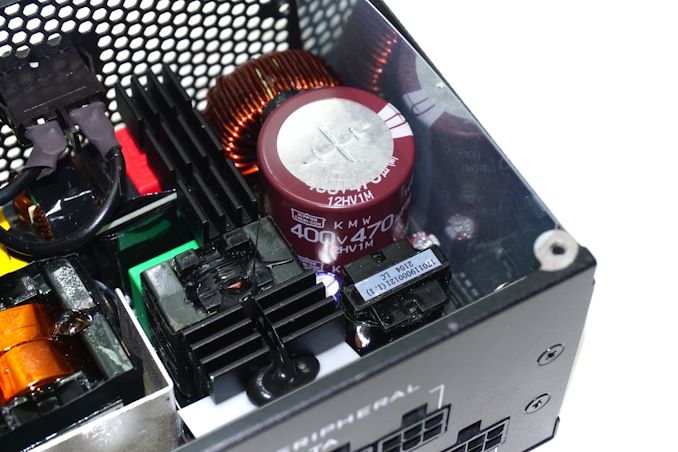 On the secondary side, we can see the unit’s relatively huge main transformer surrounded by a thin metallic plate that acts as a heatsink for the 12V generating MOSFETs. As with all modern PSU designs, the 3.3V and 5V lines are derived via DC-to-DC conversion circuits. Most of the capacitors are polymer and are made by Beryl or, for those interested in the full name of the company, Zhao Qing Beryl Electronic Technology Ltd. Although this is the first time we have seen their products in a commercial PSU, Beryl is a reputable manufacturer, with a significant R&D division and global research collaborations on the advancement of, mainly polymer, capacitors. 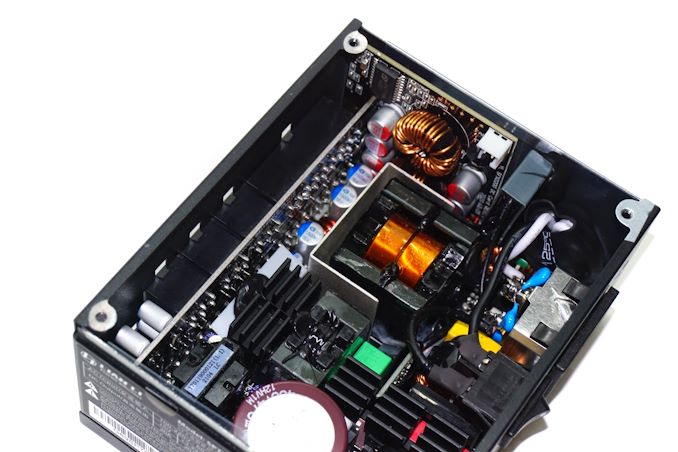 Read on for our testing of this power supply.