Seagate’s IronWolf series of drives for network-attached storage systems has gained significant traction in its market segments. One of the primary reasons has been the breadth of offerings – high-capacity HDDs targeting different applications, as well as SATA and NVMe SSDs. In fact, Seagate was one of the first vendors to introduce SSDs targeting the prosumer / SMB / SME NAS markets with the IronWolf SSD 110 series at the 2019 CES. This 2.5″ SATA SSD family was complemented by the announcement of the IronWolf 510 NVMe SSD family in Q1 2020. The SSD family, based on the Phison E12DC Enterprise SSD Controller, sported a 1DWPD rating that was not available in other SSDs targeting the prosumer / SMB NAS market.

Seagate is continuing their leadership march today with the launch of the IronWolf 525 NVMe SSDs. Based on the Phison E16 (PS5016-E16-32) PCIe 4.0 x4 NVMe SSD controller, the product appears to dial back to consumer roots with a 0.7 DWPD rating. Currently, there are no commercial off-the-shelf NAS offerings from the major vendors (Synology, QNAP, Asustor, etc.) with native PCIe 4.0 capability. The IronWolf 525 is backwards compatible with PCIe 3.0 and can slot into the same places where the IronWolf 510 is currently being used. Key confirmed specifications are captured in the table below. 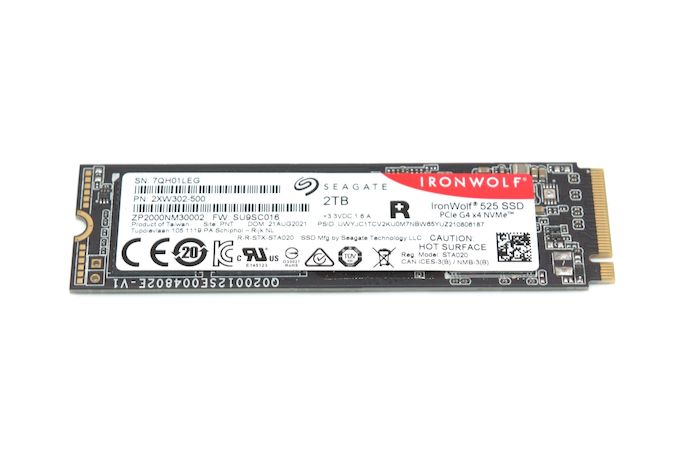 Seagate intends the IronWolf 525 NVMe SSDs to be used in commercial and entry-level enterprise NAS units, high-performance workstations, and in U.2 NVMe SSD drive bays with U.2 to M.2 adapters. These SSDs appear to have the same hardware (including the Kioxia BiCS 4 96L 3D TLC flash) as the FireCuda 520 series, albeit with modified firmware to enable the NAS-specific features such as IHM. Consequently, pricing is expected to carry a slight premium over the FireCuda 520 currently retailing for $370 (2TB), $190 (1TB), and