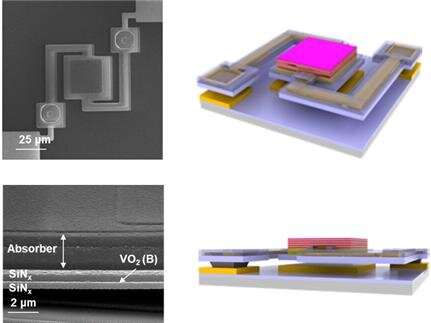 Due to COVID-19, the demand for thermal imaging sensors has increased. The thermal sensors detect and capture heat signatures of humans or other objects. The smartphone industry is actively trying to incorporate these devices as portable features. Such sensors can also be integrated in autonomous vehicles for safe driving. But the sensors, if applied in autonomous vehicles or smartphones, must operate stably without any difficulties at high temperatures of 125 degrees Celsius and 85 degrees Celsius, respectively. To meet this requirement, conventional thermal imaging sensors would require an independent cooling device. And these cooling devices are very costly.

A research team led by Dr. Won Jun Choi at the Center for Opto-Electronic Materials and Devices in the Korea Institute of Science and Technology (KIST) has collaborated with the research team of Prof. Jeong Min Baik from Sungkyunkwan University (SKKU) to develop a thermal-imaging sensor that overcomes the existing problems of price and operating temperature limitations. The sensor developed by the research can work at up to 100 degree Celsius without the need for a cooling device.

The team developed this sensor using a vanadium dioxide-B film that is stable at 100 degrees Celsius. The device detects and converts infrared light into electrical signals, which eliminates the need for a cooling device. The device demonstrates around 3 milliseconds of response time even at 100 degrees Celsius, which is about 3-4 times faster than conventional ones. Such high response speeds enable the device to capture thermal images at 100 frames per second. Therefore, the researchers believe that this newly developed sensor is a good candidate for use in autonomous vehicles.

Dr. Choi of the KIST says that “by means of our work with convergence research in this study, we have developed a technology that could dramatically reduce the production cost of thermal-imaging sensors. Our device, when compared to more conventional ones, has superior responsivity and operating speed. We expect this to accelerate the use of thermal-imaging sensors in the military supply, smartphone, and autonomous vehicle industries.”

The work is described in the journal Applied Surface Science.