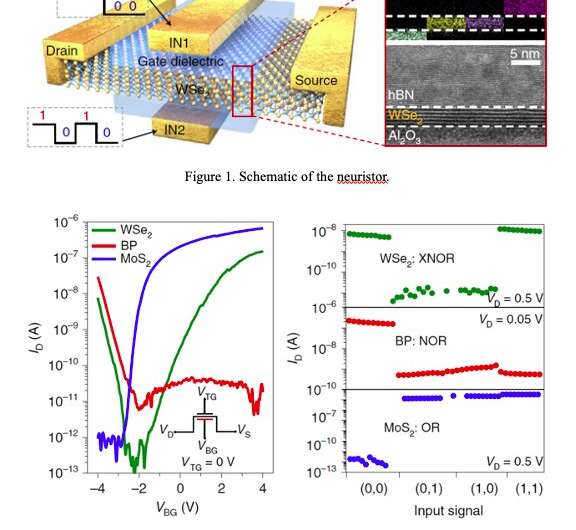 Researchers fabricate logic gates based on neuristors that can perform non-linear logic operations.

The brain activities in the human body is a great feat by nature. Individual neurons in the human body are capable of performing Boolean operations including union, subtraction and intersection. Electronics circuits that emulate the biological neurons typically require several devices to complete these operations.

The simplest possible device that can capture the properties of a neuron is a neuristor. This device uses a simple circuit to generate spikes. The neuristor receives input in the form of puffs of air that charges a capacitor placed in parallel with a memristor. The charge builds up in the capacitor and we have a spiking neuron that comprises just two elements.

Researchers at Fudan University and the Chinese Academy of Sciences developed neuristors based on two-dimensional (2D) materials that can perform logic operations without the need for multiple devices. The developed neuristors are described in a paper published in Nature Electronics.

Recent studies suggest that a single biological neuron is capable of performing complex non-linear logic operations. The researchers aim to design a single electronic device that can mimic this nonlinear logic computing ability of individual neurons in the human brain.

The researchers designed a neuristor with a dual-gate structure, employing 2D materials as channel materials. They used different polarities of 2D materials, n and p-type, in the neuristor to generate different logic operations. Therefore, one neuristor can function as one logic gate.

To validate the functionality of their designed device, the researchers fabricated logic half-adder and parity-checker circuits using two different neuristors in a two-transistor two-resistor configuration. They found that the resulting circuits offered an area saving of 78% compared to other designs with the same neuristor gates.

“We demonstrated nonlinear logic operation by fully utilizing the ambipolar-type feature of 2D materials, hence the neuristors with different polarities can mimic the logic computing ability of a single human neuron for high-efficiency computing,” Peng Zhou, one of the researchers who carried out the study, said. “The feasibility of these neuristors was further validated by using them to demonstrate a small footprint logic half-adder and high-efficiency binary neural network.”

The researchers carried out a series of simulations where they ran a binary neural network based on a 3D XNOR array. The circuits achieved an energy efficiency of 622.35 tera-operations per second per watt and a power consumption of 7.31 mW.

“As a next step, we want to add the memory layer into the neuristor architecture, so that the polarity can be switched by the memory operations instead of materials type, which means that one neuristor would generate different logic operations.” Zhou concluded.