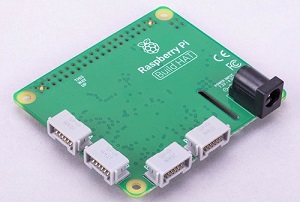 The Build HAT and the LEGO building system can be used to create robots, cars, games, a smart house and even an egg-laying chicken. The Raspberry Pi Build HAT is the second Raspberry Pi product to be based on the RP2040 microcontroller. The LEGO Maker Plate is available separately from LEGO retailers and allows users to easily integrate the Raspberry Pi computers into the LEGO building system. Users who are comfortable working with Raspberry Pi and LEGO will delight in these two brands combining to enable a fun and creative learning experience.

⦁ Raspberry Pi 48W Build HAT Power Supply is the official power supply for use with the Raspberry Pi Build HAT. Key specifications include a 110-240V AC input and an 8V DC, 6A output. The product features a 1.5m connecting cable.

“Raspberry Pi Build HAT brings together world-leading innovators Raspberry Pi and LEGO by combining the Raspberry Pi computer range with the LEGO building system. We are delighted to help inspire future creators by providing an expanded range of Raspberry Pi products which provide an introduction into electronic project design,” said Romain Soreau, Head of Single Board Computing at element14.

The Raspberry Pi Build HAT and power supply will be shipping in October from Farnell in Europe, element14 in APAC and Newark in North America.