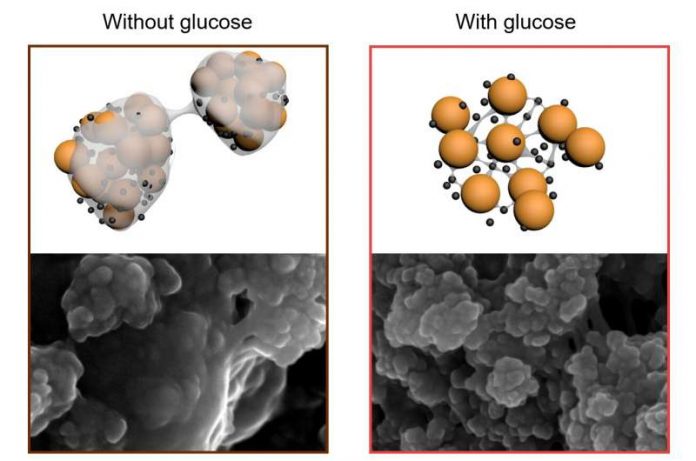 Lithium-sulfur batteries are one of the potential battery chemistries that can replace lithium-ion batteries due to their ability to store two to five times more energy than lithium-ion batteries of the same weight. However, the problem that is hampering the commercialization of these batteries is that, in use the electrodes deteriorated rapidly, and the batteries broke down. This is because the positive sulfur electrode suffers from substantial expansion and contraction weakening it and making it inaccessible to lithium, and the negative lithium electrode becomes contaminated by sulfur compounds.

Researchers from Monash Energy Institute suggest that simply by adding a spoonful of sugar, a longer-lasting, lighter, more sustainable rival to the lithium-ion batteries can be created. The Monash team, assisted by CSIRO, reported in the Nature Communications journal that using a glucose-based additive on the positive electrode, lithium-sulfur battery technology can be stabilized.

The researchers have earlier opened the structure of the sulfur electrode to accommodate expansion and make it more accessible to lithium. Now, they have incorporated sugar into the web-like architecture of the electrode to stabilize the sulfur, preventing it from moving and blanketing the lithium electrode.

The prototype cells constructed by the team demonstrated a charge-discharge life of at least 1000 cycles, while still holding far more capacity than equivalent lithium-ion batteries.

“In less than a decade, this technology could lead to vehicles including electric busses and trucks that can travel from Melbourne to Sydney without recharging. It could also enable innovation in delivery and agricultural drones where light weight is paramount,” says lead author Professor Mainak Majumder, from the Department of Mechanical and Aerospace Engineering and Associate Director of the Monash Energy Institute.