After several months of various teasers, Intel is finally starting to put the band together for their first high-performance discrete GPUs and video cards. This morning the company is kicking its pre-launch marketing game into high gear by announcing a new brand name that these video cards will sold under: Arc. As well, the company is finally giving us our first real (albeit wide) launch window for the hardware. The first Arc video cards will be released in the first quarter of 2022, kicking off Intel’s formal foray into high-performance discrete consumer graphics for desktop and mobile.

Although it has taken a few years now to come to fruition, Intel has made it clear for a while now that the company has intended to become a viable third player in the discrete graphics space. Intel’s odyssey, as previous marketing efforts have dubbed it, has been driven primarily by developing the Xe family of GPU microarchitectures, as well as the GPUs based on those architectures. Xe-LP was the first out the door last year, as part of the Tiger Lake family of CPUs and the DG1 discrete GPU. Other Xe family architectures include Xe-HP for servers and Xe-HPC for supercomputers and other high-performance compute environments. 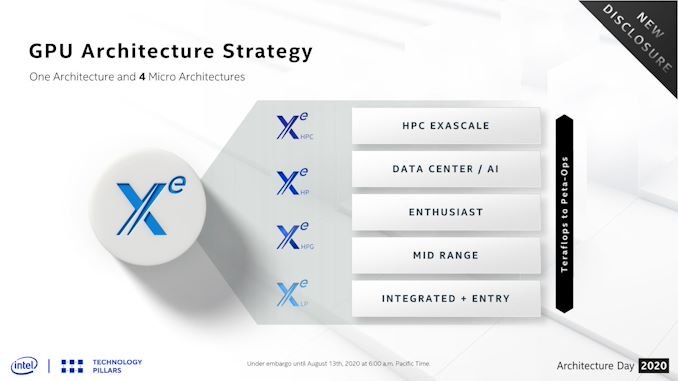 But perhaps the most interesting – and least talked about – of these microarchitectures is Xe-HPG, Intel’s first high-performance architecture for high-end consumer graphics. After months of speculation, the company introduced He-XPG just over a year ago, and with it the name of the first GPU from the family: DG2. Intel is far enough along that they have been testing DG2 in their labs since last fall, and now at last, they are beginning the long gear-up to bring DG2 to the market. And that process starts with names both for the product lineup and the architectures.

First off, Arc will be Intel’s new brand name for their consumer video cards, as well as the associated software and services. And while the classic i740 name still holds a special place in our hearts, Arc certainly rolls off the tongue a lot more smoothly. At this point it’s not entirely clear quite how far Intel’s branding will extend here, particularly if it’ll also be used in the future for integrated graphics or the eventual successor to the DG1 dGPU. 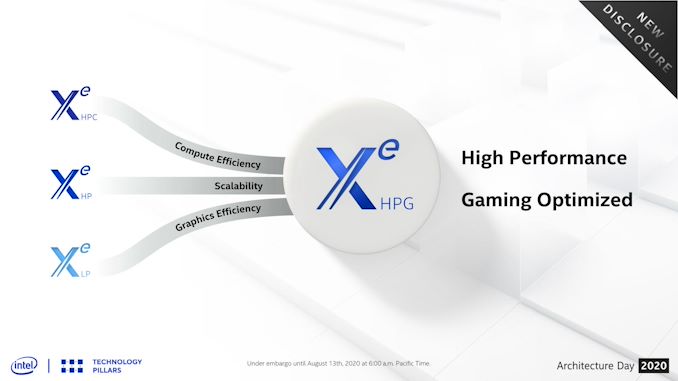 Meanwhile, Intel is also disclosing the codenames for the next few GPU generations that will make up the GPUs that go into the Arc brand. The first Xe-HPG architecture, which is being used for DG2, will be called Alchemist. That in turn will be followed up by Battlemage, Celestial, and Druid. It goes without saying that Intel seems to have a bit of a love affair with high fantasy here, which is certainly appropriate for gaming GPUs.

But, more importantly for Intel, disclosing so many product generations up-front is a means to showcase that Intel is this for the long haul, and that they’re already working on multiple successive generations of products. Despite their significant history with integrated GPUs, Intel is still effectively the newcomer in the discrete GPU space, so one of the battles the company will face is convincing potential buyers that they can invest in an Intel-based video card without ending up in a dead-end or having support dry up a few years later.

Moving on, we also kind of have a release date for Arc products. As part of kicking off their marketing efforts, Intel is giving us our first real launch window for their high-end desktop and mobile video cards, narrowing down the date to the first quarter of 2022. As with all Intel quarterly launch windows, we’re working under the assumption that Intel is looking at the later part of the quarter – so perhaps a March launch – promising that next spring is an especially interesting season in the discrete graphics space. And none of this can come too soon, as cryptocurrency-fueled demand has continued to outstrip the collective video card manufacturing capabilities of AMD and NVIDIA. Right now we need more video cards, so Arc can’t get here soon enough.

Past that, today’s marketing-focused push from Intel isn’t offering too much in the way of additional technical details. For example, we still don’t know which third-party fab and manufacturing node will be used to produce the DG2 GPU – or even just how many different GPU configurations Intel will build. With several months to go until the hardware launches, all of this is information that Intel is likely to continue trickle feeding as part of their larger marketing push for the launch of the first Arc video cards.

Alongside today’s announcement also comes a small mention from Intel that they will be throwing their hat into the ring for image upscaling technologies. As part of the Arc announcement, Intel has confirmed that the company is working on “artificial intelligence-driven super sampling”. For the last couple of years NVIDIA and more recently AMD have been making waves with their respective DLSS and FSR technologies, and it’s fair to say that Intel doesn’t want to be left out – after all, they intend to become an equal competitor in the discrete GPU space.

Unfortunately, today’s announcement from Intel is just throwing their hat into the ring, so anyone looking for a release date or information on if Intel’s in-development tech is purely spatial or spatial + temporal will be waiting a bit longer. But, for the moment, we at least have confirmation that Intel is working on their own take on the tech.

Ultimately, today’s announcement from Intel is largely a branding exercise – literally. A year after first announcement Xe-HPG and DG2, Intel is now getting its marketing machine into motion ahead of the hardware launch early next year. For now, at least, it’s more of a first word than a last word, but it won’t be the final word from Intel as they get ready to launch their Arc family of video cards. So stay tuned, as the company is promissing more information later this year.