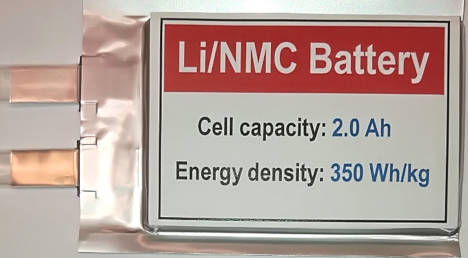 Researchers developed a lithium metal battery that can last for 600 cycles.

Lithium batteries of various chemistries are developed nowadays for large-scale and small-scale applications. These batteries rely on electrochemical reactions and degrade gradually leading to reduced capacity due to chemical changes in electrodes. Lithium batteries are prone to degradation after hundreds to thousands of charging and discharging cycles. In lithium ion batteries, the formation of the solid-electrolyte interphase in the negative electrode results in the consumption of lithium ions. This consumption of lithium ions reduces the charge and discharge efficiency of the electrode material.

The researchers used pouch cells as they are not affected by high charge rates and the loss rate due to high temperature is also very low. Thus, they are a good candidate for usage in electric vehicles and other large-scale applications.

It is commonly believed that the thicker lithium can enable batteries with a high number of cycles. But the issue, according to researchers, is that electrolyte has to reach deeper into porous structures to reach the core of a thick electrode. The further the electrolyte has to travel, the more it gets depleted. This affects the solid electrolyte interphase (SEI) process and therefore, there must be an optimized electrode thickness for each lithium-metal battery depending on its cell energy and design.

The researchers in this study focused on tipping the balance away from unwanted electrolyte-lithium reactions and towards the essential ones.

“Simply, because the lithium strips are thicker, the electrolyte needs to flow into deeper pockets of the lithium and, as it does so, it leaves other portions of the lithium dry,” said the lab. “This stops important reactions from occurring, effectively smothering necessary electrochemical reactions, and contributes directly to the early death of the battery.”

The lithium metal battery developed by the PNNL researchers is a significant step in developing lithium batteries for electric vehicles today.

“It’s a big step forward for a promising technology, but lithium-metal technology is not yet ready for prime time. While the lithium-ion batteries used in electric vehicles today hold less energy, they last longer, typically at least 1,000 cycles,” according to the lab.