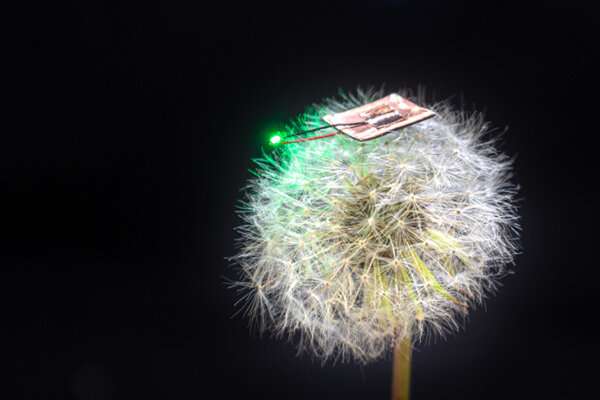 Researchers figured out a new way to build and package microbatteries that maximizes energy density even at the smallest sizes.

Portable electronic devices and wireless IoT nodes require compact batteries with high energy density and lighter weight. But the energy density gets harder to improve with a small form factor, as a large portion of the battery’s footprint must be devoted to protective packaging.

To overcome this challenge, researchers from the University of Pennsylvania’s School of Engineering and Applied Science have demonstrated a new way to build and package microbatteries that maximizes energy density even at the smallest sizes. They developed a new kind of current collector and cathode that increases the energy storage capacity while serving as a protective shell. This arrangement reduces the need for non-conductive packaging that normally protects a battery’s sensitive internal chemicals.

“We essentially made current collectors that perform double duty,” says James Pikul, assistant professor in the Department of Mechanical Engineering and Applied Mechanics in Penn engineering and a leader of the study. “They act as both an electron conductor and as the packaging that prevents water and oxygen from getting into the battery.”

Using this approach,. Researchers quadrupled the energy density than the current lightweight microbatteries.

Batteries store energy in the form of a chemical bond, which gets broken when energy needs to get released to the load. The process has to be quick to supply enough current at startup. Therefore, thin electrodes are used, allowing more electrons and ions to move quickly through the electrodes. But the energy storage capacity decreases with thin electrodes and manufacturing complexity increases.

The researchers developed a new way to implement electrodes that allowed them to be thick while also allowing fast ion and electron transport. “Instead, we deposit the cathode directly from a bath of molten salts,” John Cook, Director of R&D at Xerion Advanced Battery Corp., says, “which gives us a huge advantage over conventional cathodes because ours have almost no porosity, or air gaps.”

“This process also aligns the cathode’s ‘atomic highways,’” Pikul says, “meaning lithium ions can move via the fastest and most direct routes through the cathode and into the device, improving the microbattery’s power density while maintaining a high energy density.”

The researchers believe that their development will open up the door for smaller flying microrobots, implanted medical devices with longer lifespans and a variety of otherwise impossible devices for the Internet of Things.

The research has been published in the journal Advanced Materials.