In last week’s review of the Xiaomi 11T series, we had covered both the 11T and the 11T Pro, two almost identical phones that were otherwise differentiated by only the SoC powering them, as well as their charging speeds.

In our original review at the embargo time, and in testing done in weeks prior to the announcement, we had noted that the MediaTek powered 11T exhibited extremely uncompetitive battery life test results. Our conclusion on the device, lacking any evidence of something being wrong with the phone, was that this seemed something related to the platform, and that it was seemingly inferior to the 11T Pro.

Shortly after the announcement event (we’re not quite sure exactly when it went live), Xiaomi had issued a firmware update where battery life seems to have improved a lot (Many thanks to Domingo Gomes for the heads-up and some initial before & after testing). We also updated and redid our battery life testing over the next days. 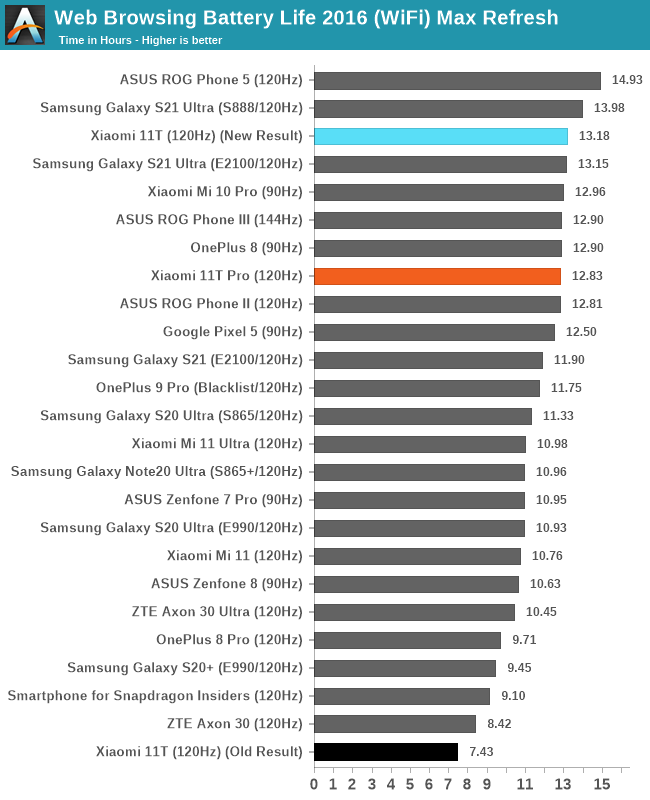 The new battery life results showcase the 11T slightly outlasting the 11T Pro, ending up more in line with expectations of where we had hoped the two phones would end up. Most importantly, this was a large improvement and discrepancy over the initial review firmware.

In terms of technical background as to what exactly had changed pre- and post-update, I hadn’t been able to measure any difference in performance, display power, or stead-state CPU power, with all results ending up almost the same as what we experienced prior. This is only anecdotal evidence, but it seems the DVFS might be faster to respond to dynamic workloads, but we can’t be certain of it. We’ve reached out to Xiaomi on the situation, but haven’t had yet received any comments back.

In view of the new battery life results, we’ve updated the conclusion and evaluation of the Xiaomi 11T within that review to properly represent our more positive take on the device: