Components Are Key For Designers

An electronic product comprises components and, nowadays, some software as well. But components still form a major part of the product’s cost in most cases. What if the components fail early and thus adversely affect the reputation of a brand? Not only will this bring a disrepute to the company, it may also affect their sales and their future. So, how do we ensure that this does not happen? Read on to find out.

The most important aspect of an electronic product is its components. A product’s success or failure depends on the components used in the product. Normally, components form roughly 75% of the product cost. But improperly selected components can destroy the product’s performance as well as damage the company’s reputation beyond recovery.

Most designers assume components are mainly electronic parts. Unfortunately, that is not true. A typical electronic product consists of three category of components;

Performance of a product depends on some key aspects like:

Why components are critical

Right component selection contributes to more than 60% to a product’s performance and reliability. Most electronics parts fail in the early stage of the product’s use. Fig. 1 which shows the reliability or failure rate curve for a typical electronic product.

When you have a component quality problem, which could be an electronics part, or custom OEM part (like power supply unit) and mechanical item failure in the manufacturing line, it falls in the zone of infant mortality. In this infant mortality failure, the losses are minimal as the product has not left the manufacturing plant. If a product fails in the customer’s location, it becomes a warranty claim or service call depending on the product’s age. If the failure is within the warranty period company’s reputation takes a beating due to the perception of bad or low quality.

Most infant mortality cases can be traced back to components, while failure could also have been due to bad design. But chances of a bad design escaping is very minimal. As you can see in Fig. 1, product failure is minimal when the product is in its active life post infant mortality stage. This performance is directly due to choice of right components. Most important aspect is that good components ensure reliable product, and that is in the hands of the designers and the supply chain team.

It is seen that engineers pay little attention to the components. They believe the data sheet 100% and think the data sheet is the golden rule. Most data given in the data sheet are statistically arrived as component tolerances and will be varying component to component. This means designers need to know how to use these limits and arrive at a reliable design. This is especially true for the passive components.

If the design is measuring voltage or current, the tolerance of the parts can kill the design if done wrongly. This article does not delve into design aspect of components from a tolerance and rating perspective in the article, which will be taken up at a later date. 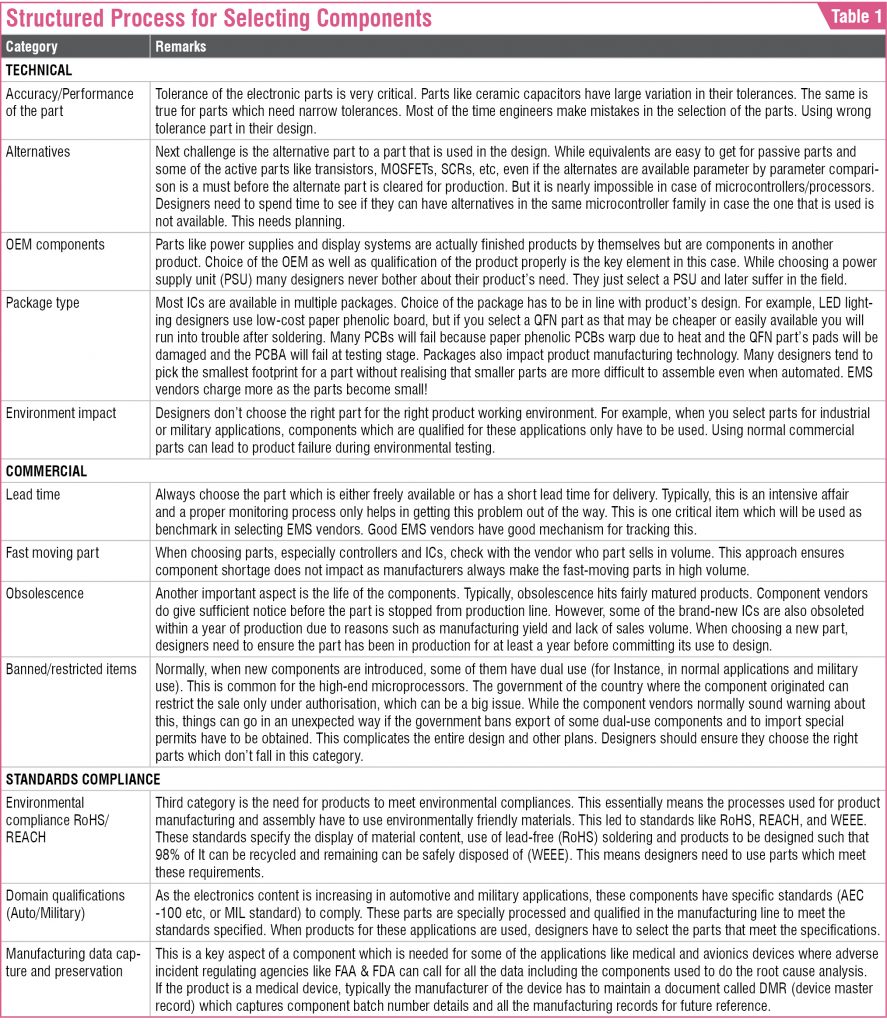 To explain why component selection is very critical, here are some examples.

When we were designing a DSL line card, we had failures when high-voltage test was done. Since the DSL lines run for 3-4km underground as well as overhead, injecting 600V AC is done to ensure, if the DSL line comes in contact, it will be protected. In the initial production in lab the design worked very well. So, we went for pilot manufacturing for certification.

But when we tested the line cards, all of them failed one by one. On comparing the board that passed with the failed one there was no apparent design change. Finally, we started looking at the part which had failed. We found that there was shunt resistance which was provided to bleed any high voltage in design, which had failed consistently in the newly made board.

Second example is pretty recent. We had designed an IoT enabled consumer equipment and the OEM wanted us to deliver 100 units for marketing purpose. The purchase team, due to lack of time, bought a particular IC (single-phase metering device) from a local vendor. But the device was a fake, except the number on the part. It was a dud device. We lost money and time, and eventually the customer too!

One common problem I have seen, when you buy parts in tray packing, there are high chances of the parts absorbing moisture when the tray is not stored properly. And the packaging can crack during reflow due to the expansion because of moisture absorbed by the packaging. This typically happens with plastic packaging.

What needs to be factored when selecting components

While component selection is a big topic and most leading EMS vendors have a separate department as part of their supply chain division for component engineering, there is a structured process for the same. Essential aspects that need to be factored can be classified into three groups that are presented here in a simple table format.

Points to be kept in mind

Component selection is the most important aspect that decides the performance of a product. Here are the critical things that designers have to look at while selecting the products: