In what looks like one of ASUS’s last motherboard unveilings for AMD’s X570 platform, the ROG Crosshair VIII Extreme is ultimately its most feature-packed Ryzen desktop motherboard so far. While ASUS at the time of writing hasn’t unveiled a full list of the specifications, we know many of the board’s core features, giving the EATX-sized board an impressive résumé. At the heart of the ROG Crosshair VIII Extreme are dual full-length PCIe 4.0 slots that operate in either x16/x0 or x8/x8 when paired with a Ryzen 5000 or 3000 desktop processor. ASUS also includes a small PCIe 3.0 x1 slot for one more peripheral.

The ROG Crosshair VIII Extreme design for X570 follows a black glossy aesthetic, with multiple areas of integrated RGB LED lighting, including along the rear panel cover, chipset heatsink, and even part of the underside of the board. Along with other X570/X570S motherboards recently announced, the Crosshair VIII Extreme will feature a passively cooled chipset. 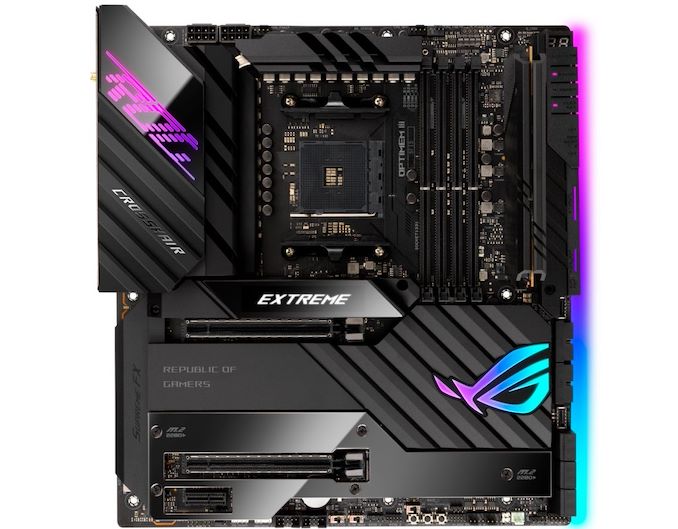 For storage, ASUS includes three onboard PCIe 4.0 x4 M.2 slots, with room to add a further two PCIe 4.0 x4 slots via an included DIMM.2 slot located to the right of four memory slots. There are six SATA ports for conventional SATA devices with support for RAID 0, 1, and 10 arrays. ASUS hasn’t listed the memory QVL list at the time of writing, but we know this board will support up to 128 GB of DDR4 across four memory slots.

Other features include an Intel Thunderbolt 4 controller that’s driving a pair of USB Type-C ports, a Marvel AQC1113CS 10 Gb Ethernet controller, and a second Intel I225-V 2.5 GbE controller. On top of this, there’s Intel’s latest AX210 Wi-Fi 6E wireless interface, which also supports the latest BT 5.2 devices. Onboard audio is also quite premium, spearheaded by a ROG SupremeFX ALC4082 HD audio codec and is assisted by an ESS Sabre 9018Q2C DAC.

With ‘Extreme’ being this model’s moniker and focus, the ASUS ROG Crosshair VIII uses a 20-phase power delivery (18+2) with premium 90 A power stages and is likely to be arranged in teamed mode, which is a common theme in its power design across the series. This also includes an LN2 mode dip switch designed for enthusiasts looking to use aggressive sub-zero cooling methods such as liquid nitrogen (LN2) or dry ice (DICE) for the maximum benchmark performance.

At the time of writing, ASUS hasn’t announced when the ROG Crosshair VIII Extreme will be available to purchase or how much it will cost.

Self-Charging Temperature And Humidity Sensor In All Lighting Conditions