In its relatively short existence, the aerospace industry has seen more changes than any other major industry. Some of the recent developments of wireless sensors on aircraft structures and health monitoring are highlighted here.

An initiative is underway to develop and deploy wireless data management systems for aircraft. As part of the WiTNESS programme, the technology will be used for preventive maintenance of fixed-wing aircraft and helicopters. Taking queue from other harsh environment installations, the data controller will optimise diagnostics.

Simulation techniques and lightweight construction are enabling BLDC electric drive systems to achieve a power to weight performance of 5kW/kg compared to the industrial electric motors of 1kW/kg. This innovation is being used for propulsion of E-aircraft systems as well as flight control actuators and autopilots.

Improved control of aircraft, lower maintenance costs, reduced fuel consumption and increased passenger comfort are major benefits of an aircraft manufacturer’s initiative to bring wireless sensor networks to commercial and military aviation. Wireless sensors are expected to reduce the maintenance costs of the aircraft, which account for more than 20% of the operating costs of an airliner.

The concept adds an assortment of sensors, which provide additional data or more precise data on parameters already being monitored. Thermoelectric generators power the wireless sensor nodes, eliminating the need to periodically charge batteries or replace them.

Aircrafts will have human-like skin that would enable them to detect injury or damage, as well as the ability to feel the world. The skin would consist of tens of thousands of micro sensors applied to the actual aircraft that will enable it to sense wind speed, temperature, and physical strain movement with more accuracy than current sensor technology.

The smart skin will allow an airplane to monitor its overall health and then report its status before any issues become truly problematic. The tiny sensors that would be used in the technology could be as small as grains of rice or even as small as dust particles at less than 1mm squared.

The proposed solution allows the installation of a large number of sensors, without any restrictions on their location, hence providing additional or more precise data. The new information, provided without any additional wires, allows for an improved control of the aircraft and presents major advantages compared to traditional solutions, notably in terms of fuel consumption and maintenance costs.

The sensors will have a life of 35 years. With this unlimited autonomy, a wide array of sensors can now be placed very close to the structures to be monitored, at places that would be very difficult to access for maintenance, such as in the fuselage, the wings, and the stabiliser. Each sensing node allows the measurements to be timed with an accuracy of less than a millisecond, for sampling frequencies ranging from 120 to 500Hz. The information is communicated to the plane computers by radio. They do not interfere with the operation of the pre-existing devices, as the system successfully passed the qualification tests related to radio interferences.

The project initiated by Airbus as part of the ‘Clean Sky’ programme resulted in the development of a high-performance and ultra-low-power wireless sensor network platform able to monitor aircraft critical structures. Each sensor is equipped with a radio transceiver and an independent power supply. Energy consumption, both during flight and while the aircraft is on the ground, has been reduced to a minimum by a combination of energy-efficient electronic components and by the optimisation of the communication protocol.

By combining the outputs of thousands of wireless sensors with big data analysis, the technology will benefit more robust defense platforms that are capable of complex missions whilst reducing the need for routine maintenance checks.

Using the smart skin technology would even reduce the need for excessive ground check-ups and allow for quick part replacement, if needed. Overall, the system could increase aircraft maintenance efficiency and improve safety. The tiny sensors that would be used in the technology could be as small as grains of rice or even as small as dust particles at less than 1mm squared. The sensors can be retrofitted to existing aircraft and spraying them like paint.

The distributed rotorcraft wireless health monitoring solutions provide a significant amount of information regarding health and usage of helicopters.

An interesting concept is the use of an additional rear-wheel electric motor drive, which allows E-fan to taxi on the ground without the main motors and also provides acceleration during take-off.

Flight-control systems (FCS) of civil aircraft have undergone huge developments in the last decades. Smart sensors to interface directly to the microprocessors and the fast response actuators to bridge the gap between the logic and the power to be controlled have greatly contributed to the various systems in the aircraft ranging from flight controls to FADEC controls of engine.

EMAs typically have a permanent magnet electric motor mounted on a reduction gear and/or a linear screw and a power electronics box. Currently, two types of EMAs with linear and rotary output are extensively used in the aircrafts. 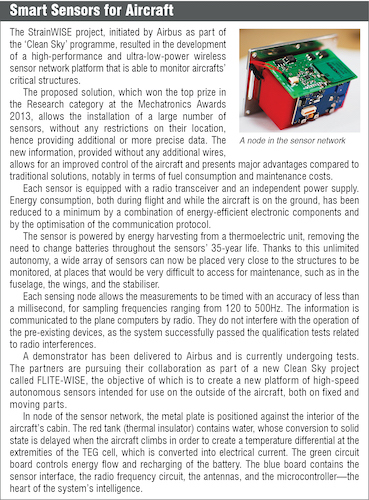 For all the low and medium torque applications electrical actuators are replacing electro-hydraulic actuators in aerospace applications. These are compact in size and are maintenance-free. They are driven by a brushless DC motor as the prime mover. The BLDC motor uses high-energy magnets like neodium-iron-boron or samarium-cobalt magnets.

A modern autopilot divides a flight into a taxi, take-off, ascent, level, descent, approach, landing, and taxi phases. Autopilots automate all these flight phases except the taxing. Landing on runway and controlling the aircraft on rollout is Cat-3B landing used in majority of the airports. Landing, rollout, and taxi control is Cat-3C. Cat-3C autopilots will be used in the future.

The following are the electrical actuation systems in most of the aircrafts:

Like the human nervous system, aircraft sensors are located at various parts of the aircraft to monitor, diagnose, and eliminate the faulty sensors during flight. These wireless systems are lightweight, easy to install, and allow for scalable sensing at a fraction of their weight and size. The sensors are powered by energy harvesting from a thermoelectric unit, removing the need to change batteries throughout the sensors’ 35-year life.

A bank of digital Kalman filters eliminates the faulty sensors, specially on the engine during flight, so that the aircraft and engine performance is not adversely affected.

B.S. Sastry is a retired project director, LCA and ex-consultant to IT firms for automotive and aerospace divisions; B. Ramana is an aerospace engineer

B550 Goes Professional with BMC